Jackie Fasano: From Swimmer to Triathlete

AGUA Masters swimmer Jackie Fasano is at home in the pool. As a child, she tried every sport under the sun—soccer, softball, basketball, gymnastics—but swimming was the one that stuck. She tried out for her local swim team when she was 6 years old and never looked back.

Jackie was a natural in the water, and she loves the friendships she has made through swimming as much as she loves the sport. Jackie swam in college for Duke University and recalls how special it was to be part of a team as she started a new chapter in her life.

"Swimming in college was an incredible experience because you got to campus and had 30 new best friends immediately," Jackie says. "You had a common interest with your teammates, and we bonded instantly." 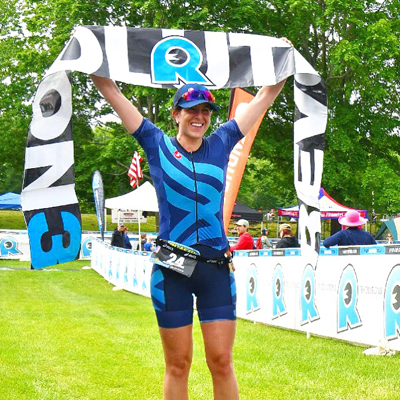 After college, she thought she was done with swimming for life. She started running but got injured every time she signed up for a marathon. Seven years later, triathlons piqued her interest because she thought it would be good cross training. As an endurance athlete—Jackie specialized in the 1,000, 500, and 200 swimming events—her skills translated well to triathlon. For many athletes, the swim is the biggest challenge, but for Jackie, it is her strength. She starts the race in the front of the pack, often times coming out of the water first.

"It's helpful coming out of the water and feeling relaxed. My mind is clear, and I feel ready to start the rest of the race," she says.

The strategy has proven effective; Jackie has risen quickly in the sport. She did her first triathlon, a half-Ironman, in 2016, completed an Ironman in 2017, and won her age group at an Olympic-distance race in Connecticut in 2018. Crossing the Ironman finish line was a particularly special moment.

"There are no words to describe the feeling. It was such a mix of emotions. There was relief, happiness. I just felt on top of the world, unstoppable," Jackie says. "I think there's something really special about crossing the finish line knowing that you tried your hardest," Jackie says.

After graduating college in 2010, Jackie took a six-year hiatus from swimming. However, you wouldn't know it watching her swim with AGUA Masters today. She needed some time to miss it a little bit.

"I went through a period of being burnt out," Jackie says. "It took me a while to put on a cap and goggles and get back in the pool. But I'm finally coming around to enjoying the feeling [of swimming] again. I still love pushing myself during a workout."

At the end of the day, the team atmosphere keeps her motivated. Whether on the race course or at a morning practice, she lights up when she sees her friends. Next up for Jackie is a relay swim across Lake Tahoe in July with some of her college teammates.

"Sports have shaped me into the person that I am today," Jackie says. "You learn skills that can be transferred to all aspects of life—dedication, perseverance, good work ethic, confidence."