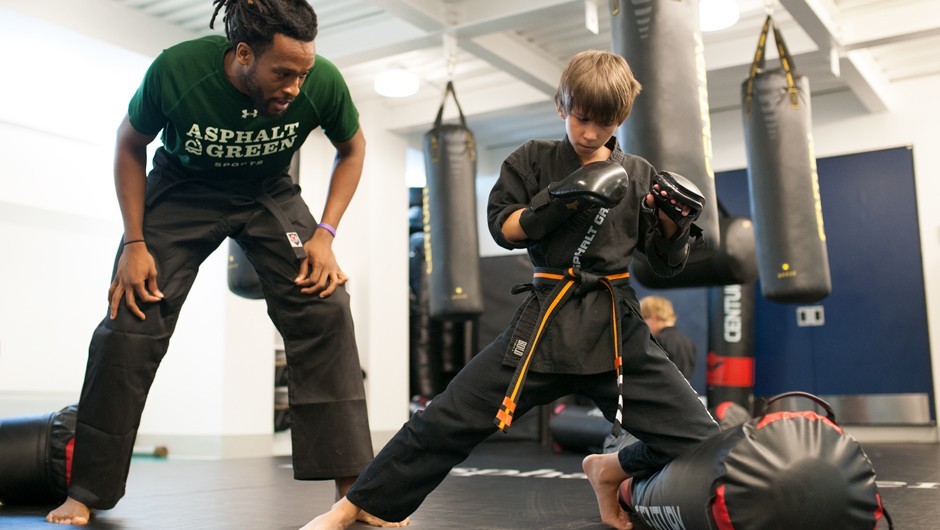 Two Sports, One Dream: Coach Montee Tarpeh’s Journey to the Top of His Game

Montee Tarpeh took his first shot when he was 5 years old. The basketball court at his elementary school was reserved for the older kids, but Montee watched from the sidelines in awe. Suddenly, the ball bounced to his feet. Without even thinking, he took a shot, and it sailed into the net with a swoosh.

All he remembers is being excited, and then being in trouble for straying from his class. Despite having to sit out from free time the next day, the shot marked the beginning of an athletic career that would take him to college, introduce him to martial arts, and eventually lead him to coaching both sports at Asphalt Green.

In elementary school, Montee was so enthusiastic about basketball, his parents signed him up for recreational leagues and camps. As he grew, he had difficulty adjusting to his new height, and his older brother, Chad (the coordinator and head coach of martial arts at Asphalt Green), encouraged Montee to try martial arts to work on coordination.

Montee took a short break from shooting hoops to focus on martial arts, but when he returned to the court, he surprised himself with his new abilities. He was quicker, stronger, and more disciplined and had better control of his emotions on the court. Although he was in middle school, he was playing with high school-aged athletes and holding his own. Unconsciously, he was applying the skills he used in martial arts to basketball.

“I believe the combination of martial arts and my supportive upbringing made my experience playing basketball better,” he says.

Throughout middle school, Montee juggled both sports, but eventually he had to choose one if he wanted to reach the next level.

“I chose basketball because it was the first thing I fell in love with,” he says. “I was focused and determined to make it far. I was set on playing professionally.”

But it wasn’t always smooth sailing. Montee’s freshman year of high school, he was on the junior varsity team, but didn’t have a stellar season and never cracked the starting lineup. It was a wake-up call.

“After my first year playing in high school, I used the discipline I used in martial arts to train myself. I spent the summer dibbling, shooting, and getting a farmer’s tan,” Montee says. “I trained past dark. I sweat. I was dedicated. I remember being on the court, shooting 100 shots by myself. When it got dark, I would know the ball went in the net by hitting it off the backboard.”

Montee’s hard work paid off. His sophomore year he made the team, started every game, and led his school to a nearly undefeated season with just one loss.

“I realized how badly I wanted it,” Montee says.

PLAYING AT THE NEXT LEVEL

Montee continued playing in college at the State University of New York (SUNY). His confidence was at an all-time high, but it was a different game because everyone was so athletic.

Though making the college basketball team accomplished one of his lifelong goals, he lacked the motivation he once had. After the high of making the team, he hit a low in the classroom and withdrew from school after his first year.

Montee found work to pay off student loans, but he still understood the importance of getting a degree. He found the motivation to get back to school and enrolled at Queensborough College. He decided to give basketball another shot and try out for the team.

“I set a personal goal to prove to myself that I could achieve something,” he says.

The skills came back easily; Montee made the team and earned MVP, all-star, and All-American honors, ending his competitive playing days on a high note. Though his career was not always what he envisioned, he persevered even when situations were tough.

Today, Montee enjoys coaching the next generation of athletes at Asphalt Green. As a basketball and martial arts coach, he sees a lot of the qualities in athletes that he sees in himself.

His first year coaching in 2013 was an adjustment. He knew how to do the skills, but teaching them in a way that was fun and young kids could understand took patience and dedication. He learned by watching others and applying his own experiences to develop a unique style. Montee’s goal is to help kids grow into better athletes and people.

“Sports give kids structure,” Montee says. “In having structure, kids get the necessary discipline in order to be their best. Through hard work, you can achieve your goals.”