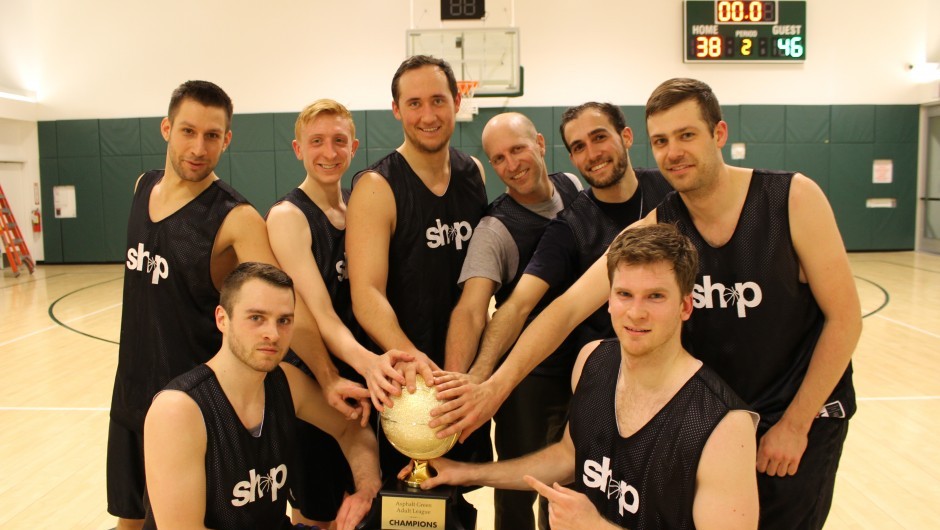 After a tough battle between Team Shop and the Bay Side Tigers for the Wednesday winter Adult Basketball League title, Team Shop claimed the championship crown March 25 in an exciting finale at our Battery Park City campus.

Team Shop defeated the Bay Side Tigers 46-38, but both teams brought championship-worthy level of play. The title game was not unfamiliar territory for Team Shop, who were able to revenge a championship loss during the fall season, where they lost by 1 point in an overtime heartbreaker.

Friends and families from both teams filled the gym, creating the best atmosphere of the season. The battle between the two highest-scoring teams brought out the best in all players. Neither team would give an inch, as both teams were diving on the floor for loose basketballs, and the intensity was at an all-time high.

Team Shop was led by Stephen Andenmatten and Dion Dekker. Andenmatten had a game-high 25 points, and Dekker added 10 points and 12 rebounds.

At the half, Team Shop was up by 8 points and held their lead for the majority of the game until Andrew Lowry led a huge rally for the Bay Side Tigers with 15 second-half points, cutting the lead to 4 points with two minutes left in the game. Despite the comeback effort and an additional 11 points and 10 rebounds from Nate Hamilton, Team Shop put the game out of reach by knocking down two free throws with 1:40 left in the game.

After participating in the league for five seasons, Team Shop claimed their first championship. This week, records are swept clean as our spring league begins. We hope to see you out there!