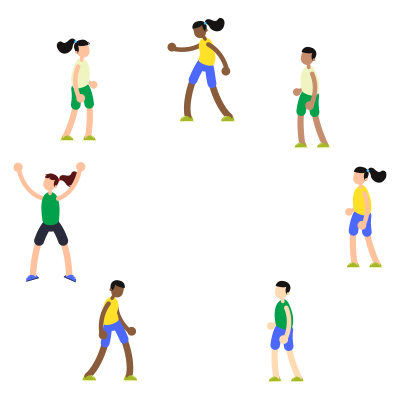 Easy: Add BOING: Whoosher says, “boing,” out loud while performing a squat. The entire circle must then do a squat while saying, “boing!” This can only be done three times in a row by the "whoosher."

Medium: Add FREAK OUT: Whoosher says, “freak out,” and begins to do a funny dance that everyone else must mimic. This can only be done two times in a row by the "whoosher."

Hard: Put a time limit on choosing the action. If a player goes over the time limit, he or she must do five jumping jacks.

Help Asphalt Green provide resources for kids to stay active. Asphalt Green, like many nonprofits, has felt the effects of COVID-19. We need your support now more than ever to continue providing for the community. We are stronger together.