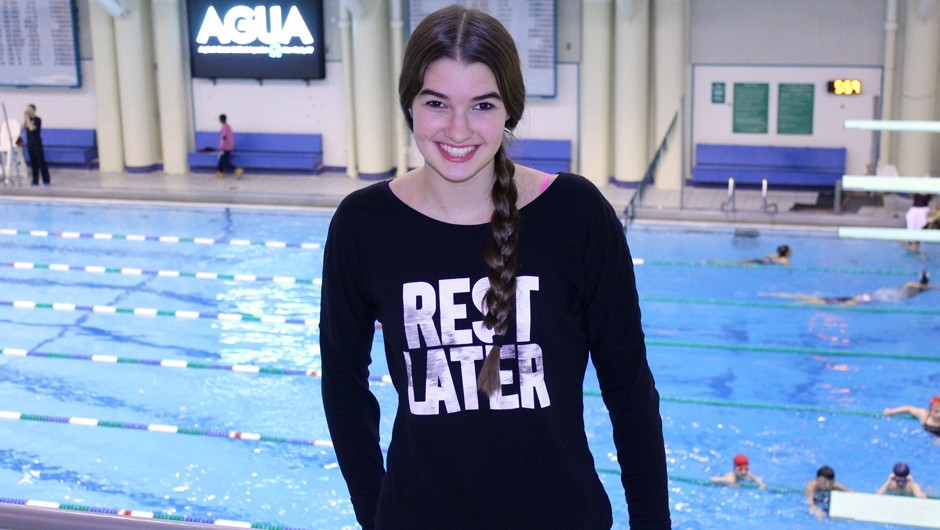 Alessia McGowan, 15, has been on the Asphalt Green Unified Aquatics (AGUA) Swim Team for nine years. Alessia, a sophomore at Trinity School, joined the team when she was seven years old. After noticing a significant shift in her training and performance at meets recently, AGUA Head Swim Coach Rachel Stratton-Mills asked Alessia to write about how her mental attitude influences her swimming to share with other swimmers on the team. All of us at Asphalt Green loved it so much we had to share it! Here is Alessia’s personal experience with overcoming the mental aspects of competitive swimming:

Having been a part of the AGUA family for about nine years now, I have had the privilege of working with an incredibly diverse coaching staff. Each has helped me develop and excel in various areas, whether it be my stroke technique, race strategies, endurance or simply my times. Likely the most challenging obstacle in swimming for me however, in both training and competition, has been reframing my mindset.

As I have grown and matured athletically, I have come to the understanding that the mentality with which I approach practice is very tied to my performance at meets. In practice, I had been notorious for saving up an entire set to sprint the last small portion, or for fabricating expertly thought out excuses of why I could not or should not complete a particular part of the workout. I rationalized challenges to the point where I could logically support, with evidence, my inability to perform at a certain standard. For instance, if presented with a set of four 400’s on 4:45, I would first break down the base per hundred. Realizing it to be just over a minute and ten seconds, I would think back to how difficult it felt previously for me to complete five 100’s on 1:10, and therefore conclude that it was highly improbable for me to make this interval. From my experience, one’s mind set is entirely habitual. And I was in the habit of finding the best way to avoid trying my hardest and failing. Subconsciously, I allowed this train of thought at meets as well. It was not uncommon for me, if I had two taxing races in a row, to mentally concede to an average swim on the second, with the justification that I had not had time to be optimally physically recovered. It was only after my first truly disappointing season last year, that I realized how crucial it was for me to look into the core misperceptions that were holding me back.

One of the most significant and impactful discoveries I made under the guidance of my coach, was that not everything in practice or at a meet had to be metaphorically black or white. In other words, one practice, one set, one event or one meet did not necessarily have to be wholly successful in order to avoid failure. Utilizing the same 400’s set example, I started by forcing myself to attack the first one as though it were the only part of the set. Even if I expended so much energy that I missed the second one, I found that I could gather myself again to try for the third. In this way, succeeding in making even just half of the set is less defeating than missing each 400. Through this understanding I further recognized that with a more self-accepting and optimistic outlook, physically I was able to achieve more than I had ever thought possible.

Recently, some of our national group members were afforded the privilege of spending 10 days at the United States Olympic Training Center. While I was there, one impactful experience for me was a lecture on mentality by USA National Team Director, Frank Busch. Thoroughly explaining the importance of preparation and focus in practice, he also emphasized the influence confidence has on athletes. I now strongly believe that this credence, which is imperative in high-stress meet environments, is directly correlated with training. Small achievements, such as making the first 400 interval, allow me to believe in myself just enough to reach the next small goal I set. Having then completed a formerly unattainable two 400’s, finishing the second half no longer seems impossible. At a meet, with this training in mind, and these small successes, the confidence I have in my preparation reduces the anxiety and self-imposed pressure I thought to be unshakable.

I therefore encourage all swimmers to honestly examine their mindset and mental preparation habits. No one is too old or too young to start improving themselves, and this awareness will prove beneficial in sport, academia and social environments. For me, the wisdom to view practices and meets on a spectrum instead of as either a failure or success, coupled with the understanding of how to best motivate myself in practice, has significantly impacted my work in and out of the pool each day. Swimming has been said to be ninety percent mental, and based on my experiences, any small adjustment of perspective can make a difference.