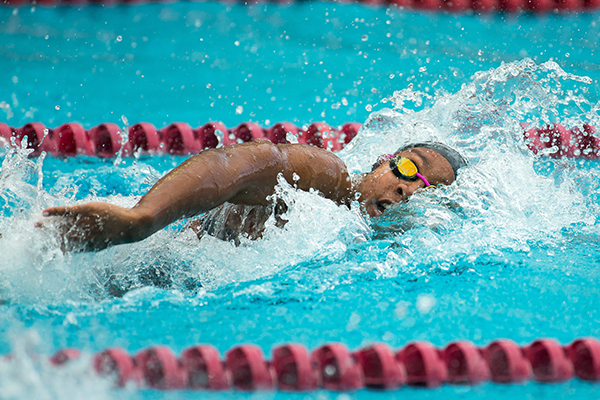 February is Black History Month. One of the ways we are celebrating is by honoring Black athletes who have transformed their sport. These athletes have not only made an impact within their sport, but they have also pushed for inclusion and broken barriers beyond the athletic arena. This list just begins to scratch the surface of outstanding Black athletes in sports history.

AGUA Swim Team alum and two-time Olympic medalist Lia Neal is a history-making, record-setting machine. Lia was the first woman of African-American descent to swim in an Olympic final for the United States. She helped the team to a bronze medal in the 4x100 freestyle relay at the 2012 Olympic Games and earned a silver in the same event at the 2016 Games. More recently, she is committed to effecting change in the sport. In 2020, she co-founded Swimmers for Change, a movement with the backing of over 30 Olympic and Paralympic athletes dedicated to supporting Black communities and educating fellow swimmers on the meaning of Black Lives Matter.

Jackie Robinson was the first Black athlete in Major League Baseball, joining the Brooklyn Dodgers in 1947. From the start of his career, he faced racism from opponents, fans, and even his own teammates. His talent was undeniable. Jackie Robinson was named Rookie of the Year in 1947, won the World Series in 1955, and stole home 19 times and finished his career with a .311 batting average. He was a civil rights activist and continued to advocate for racial integration in sports after he retired from baseball.

Michael Jordan’s name is synonymous with greatness worldwide. He played in the NBA for 15 seasons, winning six championships with the Chicago bulls. MJ is credited with popularizing basketball internationally in the 1980s and 1990s. He was also a member of the 1992 United States men’s Olympic basketball team, known as “The Dream Team.” Kids from all backgrounds around the world were saying, “I wanna be like Mike.”

Briana Scurry is legendary soccer player. As a U.S. goalkeeper from 1994 to 2010, her accolades include two-time Olympic gold medalist and World Cup champion. Briana Scurry is also the first African-American woman elected to the National Soccer Hall of Fame. As the goalkeeper on the 1999 history-making World Cup  team, she is known for making an astounding save during penalty kicks, securing the victory for the U.S.

Flo Hyman is known as one of the best volleyball players of her time. She raised the bar for competitive volleyball in the U.S. and was captain of the silver-medal winning U.S. Olympic team in 1984. She was also a civil rights activist. Flo Hyman lobbied for the Civil Rights Restoration Act and equal opportunities for women in sports.